Israeli artist Merav Eitan (1974, pictured) and German artist Gaston Zahr (1975) are trained architects. While Eitan studied at the art academy in Jerusalem, Zahr studied at the Brandenburg University of Technology in Cottbus. In 2007 they founded the design studio OGE Group in Haifa and became Artistic Directors of the Jerusalem Light Festival. OGE Group has designed several light artworks, including House of Cards for Amsterdam Light Festival in 2014-2015, which all aim to evoke an emotion from the viewer in a playful way. Sometimes the artworks do that through an interaction of sorts and other times by recalling memories and experiences.

I am your Guardian Angel 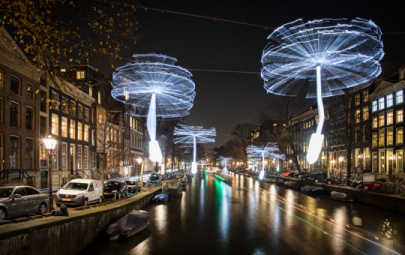