Ice skating is a winter tradition in the Netherlands. It’s hard to find a Dutch person who doesn’t get excited about the possibility of skating on natural ice, with the ominous sounds of ice cracking under our skates and the resulting breaks in the frozen surface! With global warming, skating on frozen waters such as the Amsterdam canals is becoming less and less likely. Icebreaker is an artwork that reminds us of when the canals would freeze over every year, but simultaneously a warning for the results of global warming.

It’s possible that climate change might make this typical Dutch phenomenon disappear altogether; skating on natural ice was added to national list of ‘intangible heritage’ in 2016. The effects of the world’s rising temperatures have been witnessed in the Netherlands. The last edition of the Elfstedentocht (or ‘Eleven Cities Tour’) was held in 1997; for more than 20 years, Dutch winters have not been cold enough to organise the infamous ice-skating competition.

Climate change therefore not only disrupts nature, but also our culture and associated traditions. For Wihelmusvlug, the canal boat is equivalent to breaking the promise of skating on natural ice. When a canal boat makes its way through a frozen canal, there is a good chance that the fun will be over and only a few chunks of floating ice will remain. The contours of these chunks of ice can be seen in the artwork. Every time a boat passes through the installation, white and blue cracks burst through the ice on either side of the boat. This way, the ice is broken up again and again. 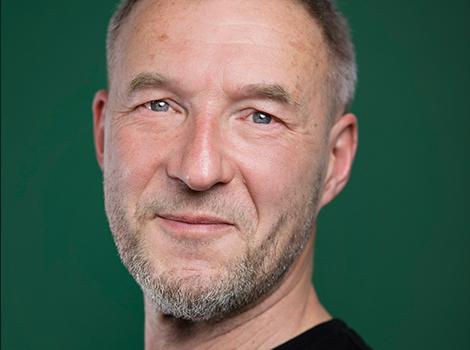 Wilhelmusvlug (NL, 1962) lives and works in Amsterdam as a multimedia artist and designer. The artist studied at the ‘Gerrit Rietveld Academie’ and specialized in audiovisual design. Wi...