Lucy McDonnell (1974) who studied Film and Television Science at the University of Sunderland and Stephen Newby (1969), graduated as a 3D designer at the University of Central Lancashire, have been making sculptures for public space for more than two decades . With their company Full Blown, they experimented with inflated metal, while their focus has now shifted to the medium of light. Under the name Studio Vertigo, Newby and McDonnell design objects that turn your world upside down and transform the (everyday) environment. 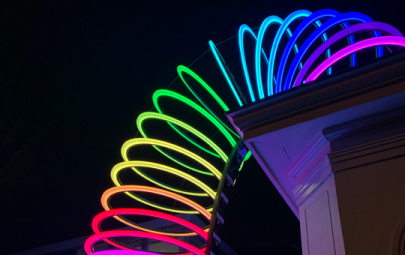